The outcome and impact of the American elections next week have been war-gamed or scenario-planned by stakeholders for some time.   Let’s assume, right or wrong, that the next President of the United States will be Hillary Clinton.  What might this scenario mean for firearms and ammunition policy stakeholders who are interested in the promotion of shooting, hunting/conservation, firearms collecting, and civil arms rights in the United States?

A Clinton victory next week would most certainly crystallize a necessary but insufficient condition for an ambitious wave of national-level efforts aimed at further restricting civilian access to arms and ammunition.

Whether or not such a wave is a high-impact tsunami or something else depends on, inter alia, how the electoral dust settles on Capitol Hill.  There are two interrelated factors driving the likelihood of an impactful policy tsunami:

Most if not all of stakeholders would be impacted if by a firearms and ammunition policy tsunami.  However, on net, the scope and scale of the adverse impact would vary tremendously among stakeholders.  This impact variability would largely be a function of a given stakeholder’s adversity tolerance profile.

So, it would actually not be correct to conclude all stakeholders would be adversely effected or even that some would not stand to gain substantially, on net.  Realistically, the stakeholders with the best adversity tolerance profile would be very likely to successfully execute a winning response and even come out better off than had there been no policy tsunami at all.

The adverse impact on the firearms and ammunition industry eco-system, holding all other factors constant, would be the most severe to the extent a given firm (and its supply and distribution partners), relative to competitors, exhibits all of the following characteristics:

The sample adversity impact assessment matrix below, adapted from a separate segmentation and sustainability study, shows one way to illustrate relative stakeholder position with respect to tolerance and net impact. 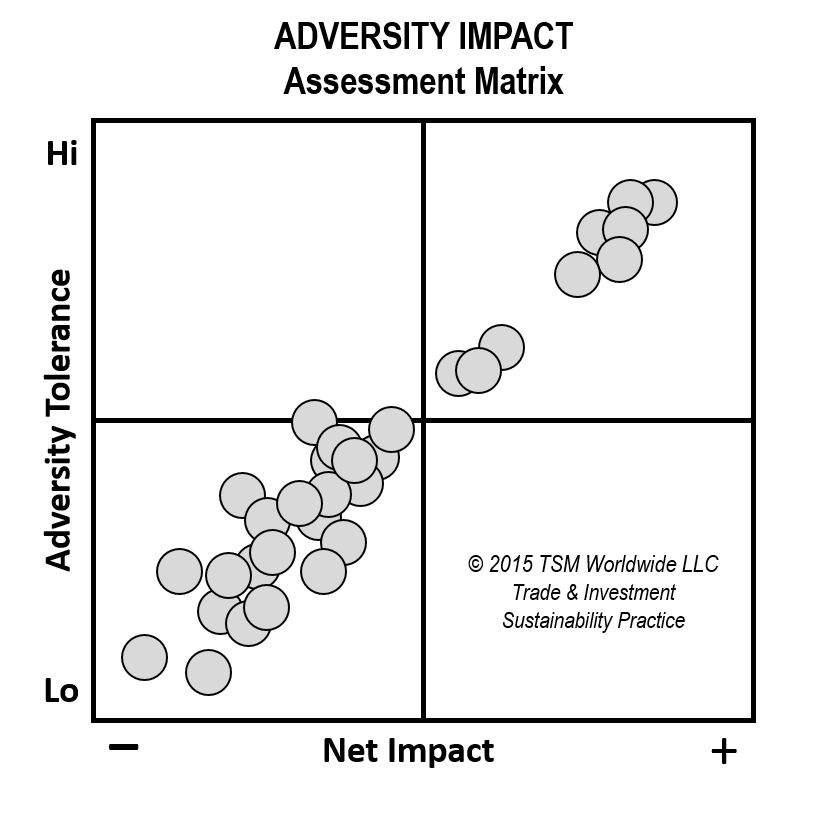 So, what might a worse-case firearms and ammunition policy tsunami actually entail from a proposal point of view?   The five most probable policy courses of action would entail proposals to implement ideas Hillary Clinton and her campaign supporters have discussed if not explicitly advocated for already:

It stands to reason that proposals additional to the ones described above could become part of a Clinton firearms and ammunition policy tsunami over time.  The most likely international source of potential policy action can be found in the details of the so-called International Small Arms Control Standards (ISACS) sponsored by the United Nations (UN) Office of Disarmament Affairs.

This is because Hillary Clinton played a critical role in the ISACS development process when she was Secretary of State, which her successor continues to play.  Reliable sources with direct knowledge and now-public internal UN communications involving members of the Obama Administration’s ISACSs engagement team confirm:

Over time, the ISACS MSI has become a case example of spectacularly flawed international standard-setting at the UN, or, in the parlance of Secretary Clinton’s top legal adviser at the time, “transnational legal process.”  The biggest driver for this was Secretary Clinton’s ISACS engagement strategy  because it enabled if not empowered key UN officials and the MSI to operate in a manner that was out of control with respect to conformance to three sets of applicable principles:

Now, setting aside the apparent complicity in a what is arguably an enterprise of professional misconduct and normative malpractice at the UN, ISACS 03.30, stands out as a likely Clinton Administration policy planning input.  This is because, by design, it sets forth model national regulations on civilian access to firearms and ammunition.  Of note, ISACS 03.30 was finally published in 2015 after several years of public controversy and strategic delays, and is now marketed by proponents as implementation guidance for, inter alia, the UN Arms Trade Treaty.

The text of ISACS 03.30 suggests six derivative policy courses of action that a Clinton Administration might eventually argue are necessary to bring the US firearms and ammunition regulatory framework into conformance with contemporary international norms and standards:

Jeff Moran is Managing Director of TSM Worldwide LLC and leads an international trade and investment sustainability practice from Amsterdam, The Netherlands.

© TSM Worldwide LLC.  Online republication and redistribution are authorized when this entire publication (including title, byline, hyper-links, graphics, About the Author, and Distribution & Informational Notice) and linkable URL here are included.  Additional information with respect to the international sources of American firearms and ammunition policy can be found here.